Swallowing disorders, also known as dysphagia, have been found to occur in five to 15 percent of the population. It is estimated that 15 million Americans have discomfort or difficulty swallowing.

Drinking a glass of water, or eating a meal are simple, everyday activities that can give us great pleasure and at the same time be so automatic that we take them for granted. However, normal swallowing of food and liquid requires a great deal of coordination of a large number of muscles in the mouth, throat (pharynx) and esophagus.

The act of swallowing is divided into three phases: 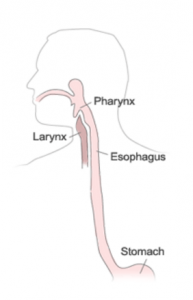 Normal swallowing is safe because the larynx or entrance to the windpipe is closed as food passes. The food is normally moved efficiently through the mouth and throat with little trace of food left behind. When larger amounts of food are swallowed at a time, the swallow takes longer and the muscles of the mouth and throat work simultaneously. At times we hold our breath to protect the windpipe as we prepare to swallow. While normal swallowing may change at times depending on how much or what type of food is swallowed, the safety and efficiency of swallowing do not change.

What Are The Causes of A Swallowing Problem?

Swallowing problems (dysphagia) can be grouped into two categories:

These swallowing problems happen before food reaches the esophagus and may result from neuromuscular disease or obstructions. Patients experience difficulty starting a swallow; food goes down the wrong pipe, or there is choking and coughing. This may result in poor nutrition or dehydration, aspiration (which can lead to pneumonia and chronic lung disease) or embarrassment in social situations that involve eating. Conditions that may cause oropharyngeal dysphagia include Alzheimer’s disease, Lou Gehrig’s disease, brain injury, cerebral palsy, multiple sclerosis, muscular dystrophy, Parkinson’s disease, spinal cord injury, stroke, Zenker’s diverticulum, cervical osteophytes or other obstructions.

What Are The Signs And Symptoms of Dysphagia?

Signs and symptoms of swallowing disorders include:

What Are The Risk Factors of Dysphagia?

The following are risk factors for dysphagia: