Click here to view the American Society for Gastrointestinal Endoscopy (ASGE) Video: “What to Expect From Your Colonoscopy”

Click here to read an article written by Dr. Bonheur for Medscape on Colonoscopy.

What Is A Colonoscopy?

Colonoscopy is a procedure which enables the direct visualization of the lining of your colon (large intestine). A thin, flexible tube called a colonoscopy, which has its own lens and light source, is inserted into the anus and slowly advanced from the rectum to the cecum (the anatomic beginning of the colon). Lesions such as polyps and colon cancer and inflammation can be found during a colonoscopy. Biopsies can be obtained, and most polyps can be removed during a colonoscopy.

What Preparation Is Required?

The preparation involves going on a clear liquid diet for 24 hours prior to the procedure. In addition, a laxative preparation is taken the night before and again, approximately 5 hours, prior to the procedure. Recent research has shown that “split dosing” leads to better visualization of the colon. The colon must be completely clean for the procedure to be accurate and complete, so it is important to follow the instructions carefully. More specific instructions will be given to you when you schedule a colonoscopy. For more details, please refer to our Procedure Instructions on our website or view this helpful video.

There are many things a person would rather do than undergo a bowel prep for a colonoscopy, but your efforts at cleansing your colon are essential for an accurate procedure. These instructions are designed to maximize the ease, safety, and success of your preparation. Please read these instructions carefully at least one week prior to your exam.

Seven days before the procedure:

Most medications can be continued as usual, but some medications can interfere with the preparation or the examination.  Medications taken at least an hour before beginning the prep should be adequately absorbed, but thereafter, they are likely to be washed away by the prep.  Inform us about medications you’re taking, particularly aspirin products, arthritis medications, anticoagulants (blood thinners), insulin or iron products. Stop taking aspirin (and aspirin-containing products) and Plavix (clopidogrel). Acetaminophen (Tylenol) can be continued or substituted as a pain-reliever for aspirin. Aspirin is usually held for 7 days.

Alert us if you require antibiotics prior to dental procedures because you might need antibiotics before a colonoscopy as well.

Three days before the procedure:

The Day Before The Procedure: Between 4 and 6 PM

The Day Before The Procedure: Between 3 and 6 PM

The Day Of The Procedure: 4 Hours Before Your Procedure 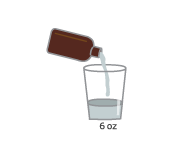 Pour ONE (1) 6-ounce bottle of SUPREP liquid into the mixing container.

Add cool drinking water to the 16-ounce line on the container and mix.

Drink ALL the liquid in the container.

If your colonoscopy is at 11 AM or earlier:
Beginning at 5 AM on the day of the exam, repeat steps 1 through 4.

If your colonoscopy is after 11 AM:
Beginning at 6 AM on the day of the exam, repeat steps 1 through 4.

Mix the Colyte/Golytely/NuLytely by adding drinking water to the indicated line near the top of the gallon jug. Shake jug until the powder is mixed with the liquid. Most people find the solution easier to drink when it is chilled, but you may
drink the solution at room temperature. If you receive flavor packets with your prescription, sprinkle small amounts of the powder into the glass of fluid to vary flavor (one package is enough for 1 gallon of fluid).

Begin drinking the solution, a large glass (8 ounces) every 10 to 15 minutes until you are finished with half the bottle. Rapidly drinking a glassful is better than sipping an ounce or two at a time. A straw may be helpful to use when drinking the solution to get it down easier. Bowel movements may begin to occur about one hour after drinking the first glass and may continue two to four hours after you finish the last glass.

Feelings of bloating, nausea and chills are common after the first few glasses. This is temporary and will soon disappear once bowel movements begin. If nausea becomes acute, stop drinking the solution for 30 minutes, then resume drinking every 15 minutes as before.

If your colonoscopy is scheduled in the morning (before 9 AM)

If your colonoscopy is scheduled in the morning (at or after 9 a.m.), use split dosing bowel prep.

Step 1: The day before the colonoscopy

Step 2: On the day of the colonoscopy

If your colonoscopy is scheduled in the afternoon (after 12 PM)

The Day Before The Procedure:

The Day Of The Procedure:

How Do I Know If My Prep is Adequate?

The stool should be watery in consistency. It does not have to be clear in color like water since digestive juices will continue to tint the stool yellow and small flecks of debris are not a problem as long as the stool is not muddy or thick. If there is any question, you can self administer a fleet enema prior to leaving home for the procedure.

What Side Effects May I Expect?

Since the prep works by flooding the intestinal tract with fluid, abdominal bloating and cramping may occur, as well as some nausea and vomiting. This is usually temporary, and as diarrhea develops, symptoms will gradually improve. Weakness can also occur, especially if you have not taken enough fluid with the prep, and can be remedied by increasing fluid intake (especially with the sports drinks such as Gatorade or PowerAde).

What To Do The Day Of A Colonoscopy?

Colonoscopy is well-tolerated and pain-free. You will be given a sedative by our anesthesiologist who will be present to monitor your vital signs during the examination. You will lie on your side or back during the procedure. The procedure itself usually lasts approximately 20 minutes, although you should plan on one to two hours for waiting, preparation and recovery.

In some cases, the colonoscopy may not be completed due to a variation in the person’s colon anatomy and concern for a higher risk of a perforation. In this case, we may recommend a CT colonography (“virtual colonoscopy”) or a barium enema to visualize the portions of the colon which were not visualized during the colonoscopy.

What Happens After A Colonoscopy?

The results of the examination will be discussed with you. If a biopsy was taken or a polyp was removed, the material is sent to a pathology lab and the results are available in approximately 5 business days. You will be contacted by phone by one of our nurses.

You will not be allowed to drive for 12 hours. You will need to arrange for someone to escort you home from our office. Even if you feel alert after the procedure, your judgment and reflexes could be impaired for the rest of the day. You might have some cramping or bloating because of air that is introduced into the colon during the examination. This should disappear quickly when you pass gas. You should be able to eat after the examination.

What If The Colonoscopy Shows Something Abnormal?

If an area needs further evaluation, a biopsy may be obtained. If polyps are found during the colonoscopy, they will most likely be removed during the examination.

What Are Polyps And Why Are They Removed?

Polyps are abnormal growths in the colon lining that are usually benign (noncancerous). They vary in size from a tiny dot to several inches. Because cancer begins in polyps, removing them is an important means of preventing colorectal cancer.

How Are Polyps Removed?

Tiny polyps may be destroyed by fulguration (burning) or by removing them with wire loops called snares or with biopsy instruments. A technique called “snare polypectomy” is used to remove larger polyps. This technique involves passing a wire loop through the colonoscope and removing the polyp from the intestinal wall using an electrical current. You should feel no pain during the polypectomy.

What Are The Possible Complications Of Colonoscopy?

Complications are uncommon but may include perforation, or tear, through the bowel wall that could require surgery. Bleeding might occur at the site of biopsy or polypectomy, but it’s usually minor. Bleeding can stop on its own or be controlled through the colonoscope; it rarely requires follow-up treatment. Some patients might have a reaction to the sedative agent.

Although complications after colonoscopy are uncommon, it’s important to recognize early signs of possible complications. Contact us immediately if you notice severe abdominal pain, fever, and chills, or rectal bleeding of more than one-half cup. Note that bleeding can occur several days after the procedure.